Rosetti’s yachts will be operated remotely

Rosetti Superyachts introduced the concept of removing navigation solutions into the superyacht industry.

The Italian yacht-building company plans to remove a remote control system from the commercial sector into the superyacht market. Such implementation takes several years.

Rosetti Superyachts announced that «some commercial unmanned vessels may be at sea before the end of the decade and the logical conclusion is that superyachts will follow.»

Rosetti Superyachts states, that "a yacht could also be manoeuvred without geographical limits by a senior officer located in a land-based office". The teams will be transferred by the captain to the control station on land via satellite channels. The vessel will be delivered by the route stated in advance. Transfering will also be monitored by the video system and night vision cameras to avoid collisions. 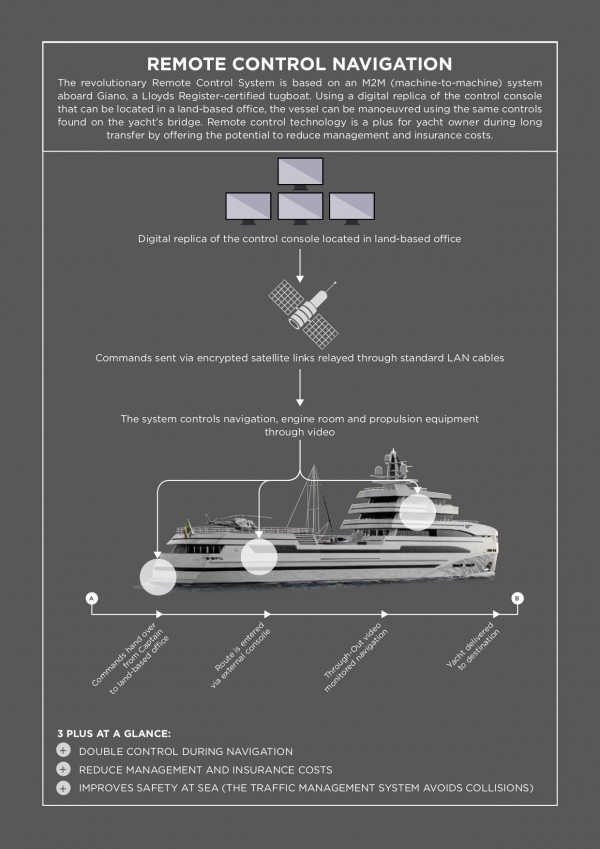 The "Remote Control System" offered by the yacht-building company is based on the M2M-connection system installed on the Lloyds Register-certified Giano tugboat. It was introduced in June 2018 at the ITS Tugnology Convention in Marseille. Advanced technology allows the ship to maneuver from a remote console, using the same controls on the bridge. At the convention, the captain demonstrated this to Carsten Nygaardm, when operating the Giano boat with a remote console right from the exhibition stand.